“The Mountains Couldn’t Walk Away” 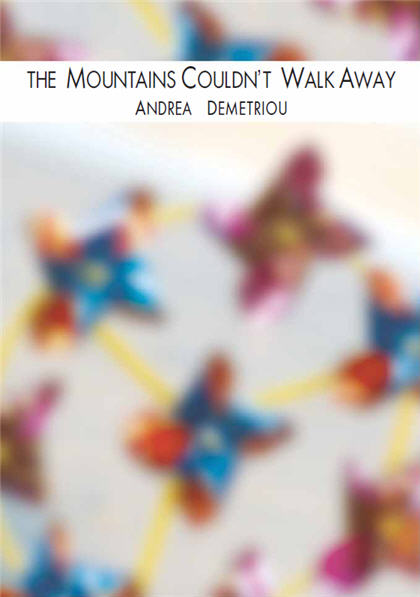 “The Mountains Couldn’t Walk Away” by Andrea Demetriou was recently launched at fortyfive downstairs by Tim Colebatch (Economics Editor, The Age), Christos Tsiolkas (Author, The Slap) Arnold Zable (Author, Jewels and Ashes)and Bill Papastergiadis president of the Greek community of Melbourne,  as part of the Antipodes Festival 2010. The  poetry collection reflects  nostalgia and its consequences for a world which was eclipsed by the Turkish invasion in Cyprus. It is illustrated  by colour photographs taken by the author and has been published by La Trobe University.  Over 170 people from diverse cultural backgrounds  attended the launch and warmly applauded  the speakers and the musical performance of the poet.

“Without memory there is no hope, and without memory there is no future “said the award winning author Christos Tsiolkas. Christos continued by saying that “ her words breathe life; her words evoke the real Cyprus, the Cyprus that if there was justice in this world, would be brought back into being. But most of us here know that there is scant justice in this world and it is difficult not to hear the refugee songs and not be heartbroken, not fall into despair. Against this despair is the refusal to acquiesce to power which gives The Mountains Couldn’t Walk Away its strength.  These poems, as I said, keep hope alive.”

Buy Cheap Generic Valium Online “I thank Andrea Demetriou for refusing silence.  Her work  reminds me, of the first refugee laments and odes that I encountered, the Psalms of the Hebrews taken into Babylonian slavery. They are amongst the most remarkable works of art in all of our shared culture. Her work too carries echoes of one of the great poets of the twentieth century, the Palestinian Mahmoud Darwish, whose work too spoke the truth to power, whose work as well sung for hope against hope. The voice of the refugee is I believe the most crucial, most insistent voice in the world today. Andrea speaks in this voice. It makes it even more crucial that we as writers and readers listen, that we make these poems part of our memory. I think it is also important to understand her work as part of a continuum of radical Australian poetry. The photographs in this book are not an adjunct, an afterthought. They speak the continued relevance and power of memory; the central importance of the exile and the outsider in our shared history. I am so thankful Andrea is speaking to us.”

Buying Valium Arnold Zable, in his speech stated “Nostaglia in Andrea’s  work is personified in the form of Papou/grandpa. Papou represents a time of unconditional love. The Central tension of the book: an eternal battle between the hope for a return versus a deep pessimism and battle to accept to surrender: as in the poem July 1996”

Buy Valium Au ‘’The Notion of the world justice, is not simply absurd, it’s ludicrous. The word as such should cause to exist. As it is constructed, established and imposed by the powerful. Cypriots know that, they have no illusions about it’’

Buy Diazepam 5Mg In conclusion he noted ,let this book dedicated to refugee children, be another reminder of the desperate situations from which people escape. The unashamed rage at the injustice, both childish and profound as expressed in one of her poems :

Buy Diazepam 5Mg Uk “People reacted with fierce rage towards the outrageous , the threat of sanctions will not bend us. It will not make us succumb to any type of black mail ,we have nothing to lose, we have endured the unendurable’’

Tim Colebatch, economics editor of The Age, said the ultimate fate of Cyprus was still to be decided. Countries used to belong to their rulers, and to ordinary people, it was less important who was in charge. But now we have democracy, and strong national identities. Countries belong to their people, and the people don’t accept losing them. Israel, he said, was a classic example. After 63 years, the Jewish state is as far as ever from being accepted by the Palestinians it displaced. A former Australian Ambassador to Israel, Peter Rodgers, argues that eventually the Jews will abandon Israel to the Palestinians, because the Palestinians have nowhere else to go and will never stop fighting to get their land back.” The same could happen in Cyprus, Mr Colebatch said. It will all depend on whether future generations of Greek Cypriots feel the same outrage and commitment to get back their land as the outrage recorded in Andrea Demetriou’s poems.

Buy Indian Valium The book has recently been added to the most comprehensive ‘’poetry library in the U.K at the Southbank  centre-  the largest Cultural  Centre  in Europe.

One thought on ““The Mountains Couldn’t Walk Away””