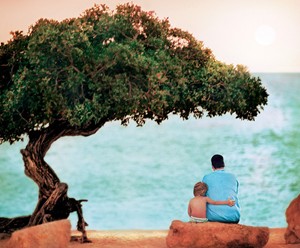 (Extract from an award winning short story in Greek)

Growing up in the outskirts of a large town serves as a conduit of conformity to tradition for any youngster; it is bound to implant a character that preserves countless family values and a certain obliging cultural mannerism. Thessaloniki, Greece was no exception. The whole setup inspired me copiously and in a wasteful feeling of togetherness so intense, so pervasive, one could almost sense its palpable presence in the atmosphere; concealing, at the same time, emotions that were seeking an outlet through a rebellious behaviour within.

I saw a myriad of soft orange-pink settings by the seashore, which expanded my horizon for infinite miles; always thinking that our world ended at the spot where the wave stopped moving inland and that another began beyond it; the edge of the wave acting as a threshold between the world I knew and the world inspired by my wild imagination.

But I was almost never alone at recollection time in adolescence. Holding tightly onto the strong rough palm of my father during our walk resulted in many an outlandish evening. Looking up, I could watch this affable, dominating figure, as tall and handsome as men come, casting his long serious gaze into the distance, a little further than his own shadow; always thinking whilst these thoughts ended silently somewhere in the golden sunset. And then, all astonishingly, they would find their way into my own thoughts causing trepidation and wonder. As for me, I was constantly examining his face in an attempt to discover a glimpse of hope radiating out from his placid expressions, developing into a relief from hardship or intolerable family obligations. I distinctly remember how persistent the thought of touching him on the face was; to feel the curves of his elastic but wrinkled skin as well as the prickles on his cheeks, to get within close proximity of his extraordinary figure.

It wasn’t difficult to detect the pain engraved in deep straight lines across his forehead. Forty or so years in parenthood do this to a man, they told me. Personally I contemplated that being a father must have its own merits, but I couldn’t perceive that it is fathering that has the most incredible rewards.

On the other hand the thing that interested me most, the thing that would make me climb the highest mountain and cross the largest ocean was his enigmatic smile usually surfacing towards the end of our walk. Tired as we were we would stop at the rocks and I would immediately rush for the most comfortable seat on his lap. We didn’t always stop at these rocks, which besides the daily pounding they took from the waves without a single complaint, were also witnesses to our most intimate discussions. I distinctly remember the tone of his voice, always rough and ever so steady. Then, at the most timely moment, he would turn his brown-green eyes over me and resting his hand on my hair, he would smile uttering the words “it is going to be fine, my son”. This remarkably simple phrase was the assurance that allowed me to return peacefully to my own thoughts, fully satisfied with a spontaneous sense of security… Who was I not to have believed him.

Iakovos Garivaldis (founder of Diasporic Literature Spot) was born in Thessaloniki Greece, and arrived in Australia as a migrant. He has studied Computer Science and is a Certified IBM U2 Developer / Administrator.He writes poetry (in both Greek and English) and in Australia was president of Hellenic Writer's Association of Australia between 1993 and 2004.Published six books, as he founded the first bi-lingual literary website in 1997, organised the first book exhibition of the works of Greek-Australian writers, organised the first photographic exhibition of Greek-Australian writer portraits and was the first to research literature on the internet in the Diaspora. Γεννήθηκε στη Θεσσαλονίκη, έφτασε στην Αυστραλία το 1970 και υπηρέτησε σε πολλούς παροικιακούς οργανισμούς. Γράφει λογοτεχνία στην Ελληνική και Αγγλική από παιδική ηλικία.

View all of Iakovos Garivaldis's posts.