Writing in languages other than English in Australia

“Australia is in the midst of a languages crisis: too few Australians are enrolling to study languages other than English.

According to a new report prepared by Griffith University, our reluctance to embrace language learning could end up costing Australia dearly...”

This report on ABC Book Show, July 24, 2009 is of extreme importance for those who write in languages other than English. It discusses the need for Australia to embrace other languages as a means of expression and literature.

Sometime ago we had created the link to the audio file here for further valuable information to our writers which will help them enormously in forming links with the wider Australian authors and writers community.

Here was the actual audio file, follow this link. However we think they have removed it.

We would also like to use this space to make a note of Diasporic’s attempts to change this trend in Australia that writing in languages other than English is unimportant. Too many stories have already been lost in the settlement of migrants to this country. The longer we leave this question unanswered the poorer Australian literature and history is.

In September 2010 we wrote a letter to the Director of the Victorian Writers’ Centre Mr Roderick Poole. The letter explained the reasons behind our concerns. The letter proposed a number of things that need to be acted on in order to enhance exposure for other language literature in Australia.

Mr Iakovos Garivaldis then discussed the same issues with the Chairman of the Victorian Multicultural Commission, Mr George Lekakis, at their meeting on 7th October 2010. Mr Lekakis vowed his support if and when it was needed.

At the beginning of October 2010 Mr R. Poole invited Mr Iakovos Garivaldis to his office and the meeting took place on October 25th where all the possibilities were discussed. Mr Poole showed quite a bit of interest but it is sentiments and trends that need to be changed; and this is a mamoth task.

Mr Iakovos Garivaldis also sent a letter to Mr Stefan Romaniw, Chairman of Arts Victoria, after discussing the matter briefly with him in a meeting. Below we include the letter to Mr Romaniw.

At the beginning of November 2010 Mr Garivaldis has also approached Mr Steve Grimwade, Director of the Melbourne Writers’ Festival via email. However no response was received by his office to date.

On November 14th Mr Garivaldis spoke to the Honorable Member for Northern Metropolitan Region, Jenny Mikakos MP and forwarded the original proposal letter to her. The MP showed tremendous support and wrote a letter of her own to the Minister for the Arts in Victoria Mr Peter Bachelor on 17th November 2010. Here is a copy of that letter.

On 24th November 2010, Mr Poole replied with this letter after a preliminary research done by Mr Garivaldis for groups of writers in languages other than English in Victoria, which was forwarded to Mr Poole.

Eventually a meeting was arranged by the Victorian Writers’ Centre on November 6th 2011. There were about 25 attendees to this meeting which resulted in several ideas being expressed. These ideas were warmly welcomed by Mr Roderick Poole together with a promise to quickly act on them.

At this meeting writers who also write in languages other than English have been branded NESB writers (Non-English Speaking Writers), a term which was not widely accepted by the participants. New moves were then pursued to place a fitting name to this group of Multilingual Victorian Writers. Some of the proposals were – 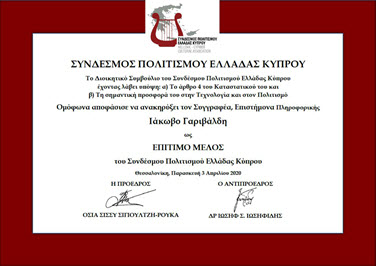