The curse of being a hero 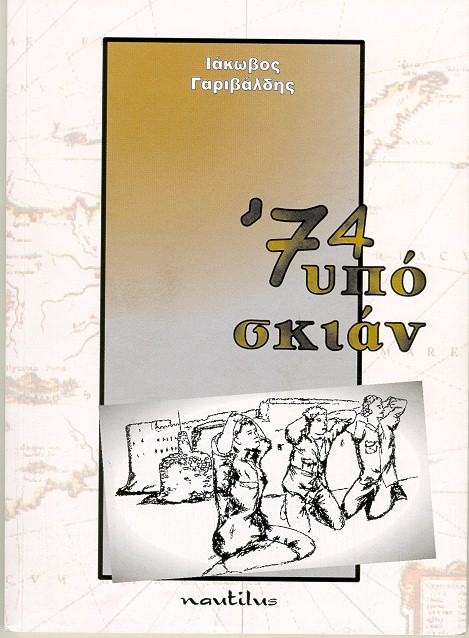 “From Australia, the land down under, comes a fresh breeze of creativity and culture.” These are the words of an Athenian culture critic, Gerasimos Kazanas, President of the International Committee for Freedom. Mr. Kazanas, whose resume embraces a notable knowledge of the Cyprus problem, studied the book “74 ypo skian” (trans. 74 in the shade) and decided to expand on what it is that it represents[2].

Further into his review calling on the Muse of the “rebellious Cyprian soul” the writer uses for inspiration the visible and invisible side of the theatrical invasion (of Cyprus) by Attila.  The “rebellious soul” being that of the nameless volunteers for the “desperate defense of the immaculate Cypriot soil.”

“An anonymous simple man from mainland Greece, married to a Cypriot girl, who lives in Cyprus, is the central character. Upon his face concentrates the national upheaval and unity of Greeks when it comes to Cyprus… ‘74 ypo skian’ reminds us of Aristotle Valaoritis’ (1824-1879) epic lyric poetry but it is something completely different…”

And Gerasimos Kazanas is only one of those, scholars or otherwise, who have uncovered the pages of this book with interest and insight. Others who called it an important stage in the epic lyric poetry of Australia to name a few are: Dr. Alekos Diamantis of the University of South Australia, Ms. Ermioni Vasiliou, a linguist (PhD) of LaTrobe University in Melbourne, Australia, Mr Takis Efstratiades (OEM) President of the Hellenic Association in Victoria, Mr Thymios Charalambopoulos, President of the Greek-Orthodox Community of Lalor in Melbourne and others[3].

The book continues to unravel events of the invasion of 1974, referring to missing persons, affected families, cowards and more importantly heroes. Refers to those men who fought with an unsurpassed belief in freedom and the truth. Those men who fought for their country and their ideals. The country they placed above everything else in their lives under that hot July sun. When the betrayal of trust reached a climax. At the end of the day the real sufferers were the simple people, who resisted the ruthless guns of the invader with every means possible. New heroes were born. Most of them will not be commemorated as such, because there will be no one to write about their achievements. One of them, “Mihalis the Kalamarás”, feels the need to defend every inch of soil. Enlists as a volunteer, without hesitation and with the conviction evident in his heart, gets into the action. The man from Pellapais, after the first battle is nearly captured. Running from heavy tank-guns enters an attic where he lives for two and a half months surrounded by Turkish forces. He can hear their voices and witnesses brutal treatment of homes and property not their own, but cannot move an inch. Eventually he manages to escape covered by darkness with an uncontrollable urge to find his family and his home. And he returns home not to be recognized by his own wife. There in the enclaves, he is captured soon after and the torture begins with an intention to undermine his spirit. Finally in a bloody mess and expecting to die under the treatment in his cell, hears of his possible release. He lives to tell his tale. But the real horror tales lie with those who never made it out of the holocaust. If the buildings or cells they died in could speak, if the soil could regurgitate those bodies and re-enact the crimes what unacceptable horrors would we have been faced with? Can we imagine the devastation and the cold-blooded murders? But those who died were perhaps the lucky ones.

How can this be, you may ask? What is it that this book represents? Who are those the writer is trying to name and what is he really trying to promote? What are his real motives? In an attempt to answer some of these very valid questions consider this: As long as a man is not happy to enclose himself in his own world, in his immediate surroundings, there will be books like “74 ypo skian”. Books like this will refresh the spirit of those who fight for truth and beliefs far beyond those of our daily needs. Beliefs, that for the wider community, do as little as having a significant affect on freedom fighting in the world against all odds and as much as liberating people’s idealism.

If you allow as much, making a small parenthesis here, we will take a trip back in time to the battle of Salamis where the Greeks were victorious as Herodotus tells us[4]:

“ Valium Online Norge 123. When the spoils had been divided, the Greeks sailed into the Isthmus, where a prize of valor was to be awarded to the man who, of all the Greeks, had shown the most merit during the war. When the chiefs were all come, they met at the altar of Neptune, and took the ballots wherewith they were to give their votes for the first and for the second in merit. Then each man gave himself the first vote, since each considered that he was himself the worthiest; but the second votes were given chiefly to Themistocles. In this way, while the others received but one vote a piece, Themistocles had for the second prize a large majority of the suffrages.”

“ 124. Envy, however, hindered the chiefs from coming to a decision, and they all sailed away to their homes without making any award…”

In the above passage Themistocles, being a hero that he was, almost never received his dues for the fact that Greeks from ancient times were so self-centered and in some ways egotistical in acknowledging the greatness of their own heroes.

Those who died in battle described in the book “74 ypo skian”, have been the lucky ones. They were the ones whose names were recorded in history as having given their lives for their country. However, those who managed to survive the callous destruction, even if they are bodily intact carry severe psychological wounds, deep scars that are never going to disappear from their wretched lives. They are the ones who need our sympathy and support. And we’re turning a blind eye, as we have with our heroes of the past, as Herodotus tells us. At which stage shall we recognize the need to honor those who honored us by their heroic deeds? When do we begin to show respect for their families who have been with this reality for so many years? When do we do something as insignificant and humane as to show understanding?

This is what “74 ypo skian” is all about and a whole lot more. And it tells it, in its own clear-cut way, using its own poetic style, with conviction and persistent deliverance.

In conclusion, and not in an attempt to define the limits of anyone’s generosity, can one assess in their own mind how these tragic circumstances can become unbearable in the afterlife; especially unbearable for those who lived through such an event. And after heroes deliver what we expect of them. In addition, can we consider this vital question: “How do we treat our heroes who are still alive?” And how has the State taken care of them, in their plight? As Hellenes, do we practice our obligation never to forget their deeds? Are we able to apply our ideals with the same conviction when we assess and value their lives and the lives of their families? Do we see their deeds as affecting the assessment and more importantly the value of our own?

[3] Excerpts from these reviews in Greek text can be found on the following web-site: www.vicnet.net.au/~hwaa/logos11/page40.html