Saltwater in the Ink: Voices from the Australian Seas 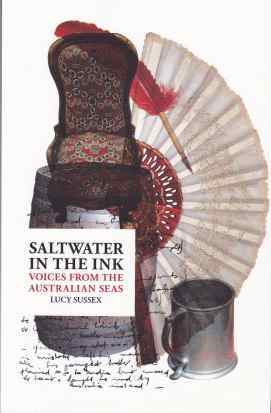 Lucy Sussex gives public voice to the private thoughts, experiences and observations of selected nineteenth-century seafarers to the Australian colony. These seafarers kept a record of their voyage either as letters to loved ones left behind in England or in journal entries. The white glossy cover of Saltwater in the Ink, composed of a chair covered in red patterned fabric, a red quill, a laced decorated fan, pewter cup and barrel, is aesthetically appealing and invites exploration. Each selection is uniquely titled to suggest a link with such artefacts, with an introduction and afterword that provide a context to the seafarer’s account. For example the Ritchie sisters are presented under the title ‘A Battered Pewter Cup’ and Mary Isabella Cameron under the title of ‘A Girl’s Golden Bracelet’.

‘Lines Written On The Back Of An Envelope’ presents an account of John Lang’s trip through the Torres Straits on his voyage to India (37). Sussex introduces the account written by Australia’s first novelist:

The envelope is post marked 1941, and is addressed to my father Ronald Sussex. On the back, in tiny, precise, handwriting of his youth, are family history notes. That he used such a scrap of throwaway paper indicates that someone was telling a story, and he noted what was said on the nearest paper available. And then kept it, untranscribed. (36)

The paper scrap tells the story of her great-grandfather Alexander Fyfe’s voyage to Australia after missing the ship to India. The introduction to ‘Something Personal’ contains a more detailed account of aspects of her family history observing that her father had never mentioned a letter from his grandmother Nancy Wardman Sussex, ‘…the living voice of an ancestress of whom we had nothing else tangible, no photos, nor keepsakes’ (192). Sussex observes:

Buy Valium Overseas It is perhaps not so surprising that he did not pass on what he knew. Nancy Wardman Sussex came from the patrilineal line, being my father’s father’s mother, and family history tends to be matrilineal. Women hoard and disseminate more, they pass recipes from mother to daughter along with christening gowns, sepia photographs, and anecdotes. (193)

How To Buy Valium In Australia Most of the selections in this book have been written by women. Not all relate to the history of the Sussex family. Some readers, therefore, may discover references to personalities in their own heritage.

Valium Usa Online Discussion with an English friend, who had migrated to Australia with his family as a child in 1964 on the Orcades, produced a signed copy, by the Captain, of celebration at the Most Noble Cross of the Equator asserting that the traveler ‘…accepted with Good Humour and Withstood with Fortitude the most Rigorous Initiation into the Ancient and Moistening Rites of our Aquatic Court.’ In other words a dunking as my friend explained[1]. The crossing of significant points in their journey is one of the recurring themes in this collection. For instance, Isabella Cameron, writing in 1947, says, ‘Good morning my lambs. 24 of November we expect to cross the line tomorrow’ (10). On 25 November she notes that: ‘As the time approached I felt rather sad at taking leave of the Northern hemisphere. Now we are indeed separated, but I am determined to live in hope’ (11). Priscilla Raleigh, in her journal 11 August 1843 writes:

Our days pass with so much of sameness that it seems almost as if a journal must be made up of trifles we expected to have been at the line before this, but contrary winds have prevented our reaching it we are now in lat.3.7.lon’. we have made 49 miles from noon yesterday till noon today. (76)

Crossing the line to the Southern hemisphere represented severance from the homeland.  Charles Chomley, returning home on the SS Great Britain in 1861 records:

Buy Msj Diazepam Uk 16th. Tuesday. At 6 o’clock this morning we crossed the equator and now the ship is our only tie to Australia, the ‘Southern Cross’ is rapidly setting & the Northern constellations becoming plainly visible, we pass oceans of flying fish & whole fleets of Portuguese men of war. … Several ships in sight but none for Melbourne at least not that have been close enough to signal. (122)

For others the dislike of the colonies prompted departure. In 1841 John Lang writes about the trip through Torres Strait:

The scene of desolation in the town of Sydney, and the melancholy aspect of the inhabitants, gave me a strong dislike for the colony, and I resolved on returning to England by the first favourable opportunity. (38-9)

Buy Valium 5 Mg Online Lang then went to India where he stayed for five years.

http://anitaanand.net/wp-cron.php?doing_wp_cron=1597345480.0936169624328613281250 Other recurring themes in the selections relate to the changing weather conditions; descriptions of scenic sea and land views; deaths of adults and children buried at sea; observations of the behaviour of other passengers, particularly the inebriated, and the kindnesses or otherwise of the ship’s captains. In a contribution titled ‘Berlin Embroidery’, Mr and Mrs Richard Cox, on board the Cromwell from London to Melbourne in 1849, write:

Our ideas with regards to things in general are not very pleasing. We have not a very good liking for the Captain, who we consider is anything but agentlemen, and the passengers are low ill bred set, and having to be continually in such company is not very comfortable. The doctor is a strange character having been drunk on board already and abusing several passengers.(63)

Diazepam Order Zolpidem A whiff of snobbery here? The family established a wine and spirit store in Melbourne and serviced the grog needs of the 1850’s gold rush! (68)

http://blogs.keshokenya.org/wp-cron.php?doing_wp_cron=1597296535.4529950618743896484375 Other entries comment on destiny, faith, and the challenges of leaving loved ones for the unknown. Mary Isabella Cameron’s destiny was to marry the Colonial Land Owner Donald Cameron, of Fordon in North Tasmania who, according to Sussex, had gone “home” as colonials called the British Isles, to find a wife. He also added to his swag a piano and a billiard table’ (1-2). Donald fulfilled her father’s wish to discipline the rebellious Mary to study. She writes that he told her that:

he wouldn’t go back till I was extremely clever, etc., so I have made a vow to
go to my studies with renewed vigour and get home as soon as possible. Now,
my own Pa must praise me, for to confess the truth, I abhor learning. (15)

Valium Online Uk Next Day Delivery Mary berates her father for telling Donald to make her ‘learn French everyday, but actually on Saturday also!’ (8). Later in her journal, on 27 November, she writes that she’d like Sunday off: ‘But unfortunately for me, he does not agree with me, so there I have been learning lessons all morning, and I just detest them (12). Clearly, though, she wanted to write her journal and complains that she was prevented from doing so when the ship, Tasmania, rolled ‘so much’ (13). Donald became a prominent Tasmanian pastoralist and conservative politician and after a year of marriage Mary wrote to an aunt that she adored her husband (29).

Buy Valium From Canada At the time I was reading these accounts Australia witnessed the horrific drowning of refugees against the cliffs of Christmas Island as their wooden boat was destroyed in turbulent seas. At a personal level, I discovered letters of my grandfather written in 1929 to his beloved wife and daughter. I realised how little I knew about him apart from the fact that he had sailed, alone, to Australia from Greece, as a sixteen year old, before the turn of the nineteenth century. Somehow he found his way from Western Australia to the Northern Territory then to Victoria. We do not have the benefit of a written record of his sea voyage experiences.

Valium Buying With the current spate of television programs researching the history of selected celebrities, such as Who do you think you are and Faces of America: Know Thyself this book serves as a tool for those motivated to undertake their own research into their family history. Otherwise it can simply be enjoyed for the insights it offers on Australia’s colonial history.

Order Valium From Mexico [1] My thanks to David John Reece for reproducing the copy of this document signed by Captain E.G. Riddlesdell.