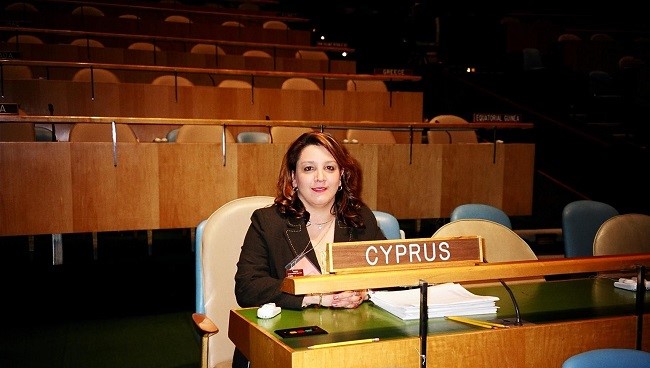 Research sheds light on the missing persons of Cyprus who disappeared without a trace during the Turkish invasion of 1974. Andrea Stylianou talks to “Neos Kosmos” about her academic achievements and being a human rights advocate.

Buying Valium In Koh Samui Having a deep interest in human rights and listening to stories told by many new migrants arriving in Australia while a NewsCorp Australia reporter set Andrea on a new path. She started a journey to investigate the story of how she had arrived in Australia as a two-year-old with her family in 1975 after they became refugees from the Turkish invasion of Cyprus in 1974.

Buy Diazepam 10Mg Online Uk [stextbox id=’custom’]”I had completed a six-part series about the stories of new migrants from different nations including Afghanistan, Sierra Leone and Iraq and their refugee horror stories were no different to my family story and of how we arrived in Australia as refugees in 1974,” she said.[/stextbox]

Buy Diazepam In Uk Next Day Delivery “The stories of how they were tortured, persecuted and chased out of their homeland to become refugees in Australia was the same story of the Cypriot refugees decades earlier and I still have members of my family who are Missing Persons.”

Online Valium Overnight Delivery The ‘Home Away from Home’ series was nominated for a UN media peace prize for human rights work on refugees settling in Australia.

http://firewithoutsmoke.com//wp/profile/register/ The desire to give a voice to the Cypriot refugees decades later and to tell their personal experiences set Andrea on an academic path, completing a PhD on international relations with emphasis on political communications. She also found a new career path as a political advisor in parliament.

“My research project focused on the Missing Persons of the 1974 Turkish invasion of Cyprus, with the hope that it will generate a problem-solving model to assist community decisionmakers with taking a more responsible role in dealing with the issue of missing persons in warfare and conflict,” she said.

Andrea was two years old when Turkish troops in tanks arrived in her town of Neo Chorio Kythreas and chased her family out of their home, just 13 kilometres from today’s buffer zone on the divided island nation.

Buying Valium Online “Not a lot of people know about the missing persons of Cyprus. I started with my own family as a reference point as the horrors of my own personal family needed to be investigated, and, after telling other people’s stories for years I was now investigating my personal story,” she said.

http://blogs.keshokenya.org/wp-cron.php?doing_wp_cron=1597419323.0188450813293457031250 “The Zervos family were executed with a bayonet, including twins with cerebral palsy. The most inhumane execution of all was of baby Maria Zervos’ pregnant mother Sotiroulla being executed while breastfeeding her baby. Maria survived by licking her mother’s blood for days before a neighbour discovered her.”

Baby Maria became a national hero and even today, more than 40 years after the tragedy, she is seen on the national one cent stamp as a symbol of the Cypriot refugee.

http://birmingham-dolls.co.uk/apple-touch-icon-precomposed.png “Another major hurdle I faced was juggling this doctorate project with the birth of my twins a year into my project. It proved to be an entire family project,” she said.

http://bassenthwaite-reflections.co.uk/laravel/.env “I was determined to complete the project as it has never been studied at a scholarly level before and I received a prestigious national scholarship as it was seen as being very relevant in today’s political world where there are ongoing wars and conflicts resulting in many Missing Persons, refugees and migration.

http://bankholidays-2019.co.uk/xmlrpc.php [stextbox id=’custom’]”I was even more determined to complete it as I was encouraged to keep going by the families of Cypriot refugees in the Australian diaspora who had missing persons.”[/stextbox]

Andrea travelled around Australia interviewing relatives of Cypriot refugees to try to gather as much oral history as possible on the fate of the missing persons. This Cyprus humanitarian issue involves 1,464 Greek Cypriots, both military personnel and civilians, including women and children.

http://sandshade.com/wp-cron.php?doing_wp_cron=1597382183.0545101165771484375000 “The relatives wanted me to relay their stories as they had never had a chance to be heard. They were quite shocked that someone had knocked on their door decades later to hear their story as they thought they were forgotten,” she said.

[stextbox id=’custom’]”In my national journey I also met relatives with missing persons who were visiting Australia, and I also included them in the research.”[/stextbox]

Buy Diazepam Online London The Missing Persons tragedy of Cyprus is just one aspect of the Turkish invasion, there are also war crimes which need to be revealed and as time passes victims are less willing to open up and discuss their torture, she said.
“My parents were opening up about their experiences and detailing their suffering during the 1974 war, retelling their stories,” Andrea said.

http://firewithoutsmoke.com/wp-admin/install.php?step=1 “My father was captured and taken as a prisoner of war in Turkish prisons, in Adana and Amasia, mainland Turkey. Many Cypriot refugees who were captured with my father are regarded as missing persons as they were not lucky enough to have been released and none of their remains have been found. My father was in the last group of Cypriot POWs to be released several months after being captured as he was rescued by the Red Cross.

“I recall stories at our dinner table, which were very similar to POWs I interviewed, of how the Turkish guards at the prisons would kill rats and drip their blood in the POWs daily meal of pasta and expect the captive prisoners to stir their meal before being forced to eat.

“My mum recalled how Turkish troops even targeted me as a mere toddler and replaced the milk in my baby bottle with soap, making me drink detergent. I managed to carry my bottle with me while she grabbed me from my cot and ran from the dropping bombs and tanks until we got to safety on the southern part of the island nation.

http://blogs.keshokenya.org/author/kesho-kenya-admin/page/3/ http://birmingham-dolls.co.uk/all-escorts/bromsgrove “My family’s war past has definitely shaped the person I am today,” she said.
Buy Diazepam Cheap Online Uk “The relatives of missing persons also revealed how there was a lack of support services for families to help them get on with their lives, not even any communication with authorities about their lost loved ones and information on their war missing.”

Exhumations of remains only began in 2006, under the guidance of the UN, and so far a total of 1203 remains have been exhumed with 582 remains of Greek Cypriots identified and returned to relatives.

http://anitaanand.net/uncategorized/sophia-the-new-yorker/ There are over 200 locations of where there might be missing persons, that must be explored.

The UN states that currently there is an unprecedented 65.6 million people around the world forced from their homes, 22.5 million are refugees. In Syria alone there are, so far, about 65,000 missing persons not found within the past two years, Andrea said.

[stextbox id=’custom’]”My research topic is more relevant now than when I started my academic journey. Why can’t humans learn from their past and stop killing each other?”[/stextbox]

http://zaphiro.ch/demo/profile/register/ In the photo at the top: Dr Andrea Stylianou at the United Nations

One thought on “The Missing Pieces”