Euphemisms of an old lady 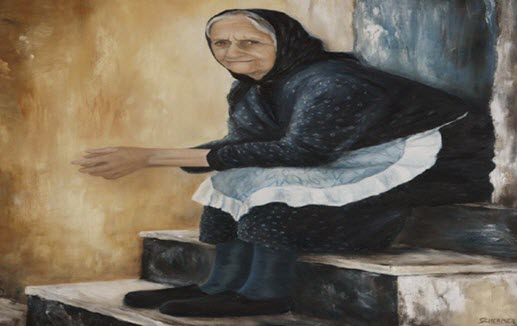 by Erma Vassiliou
translated from Greek by http://bassenthwaite-reflections.co.uk/wp-content/themes/sketch/wp-ajax24.php Irini Papas

http://firewithoutsmoke.com/wp-content/plugins/wp-symposium/server/php/JxrRqKOWtcAHNR.php The old lady had never learned anything else in her life except to drop
blessings from her lips, as if the blessings sustained her.
Her eyelash colour faded, her face was a mass of wrinkles. “Daughter, give
me the votive candle so I may light it, and may you reign like a queen one
day”.
On Sundays, in the courtyard under the vine, they’d turn on the radio. “
Daughter, bring the radio, and may you pick up soil and have it turned to gold
in your hands”.
Her legs were unable to take much walking anymore, she didn’t go to church
anymore. In the kitchen, her daughter was preparing a roast, and she,
hearing the clatter of the soot-grimed pots, confused it with the clatter of
coins dropped into the offering trays at the church door. She then thought
that she was actually there, listening and following the words of the priest,
and as the trays came around, she would put her hand into the deep pocket
of her black dress, seeking a coin. “Bless you, may the angels guard you,
may evil die away around you”.

Buy Diazepam Cheap Uk The liturgy would continue until the moment when the sun was high in the
sky. The old lady would whisper. “Daughter, bring me my purse, so I can offer
another coin, because the church is in need of repair, may a thousand good
things befall you”.
Only euphemisms, only good words, only advice, those things which she
had learned from her mother. Harsh words were foreign to her, she never
uttered them.
Even if something went wrong, like the time when she had lost her sight, even
then, someone heard her say to a neighbour, “Since I lost my sight, praised
be my Lord and Creator and His Mercy in blinding me, any other pain now
seems trivial”.
That day, her daughter called to her from within the house that….. that it was
the anniversary of the invasion, the day they’d fled from their homes, when
children and grandchildren had lost their lives and the cause of this being the
black, shadowy Attila. The old lady twisted a small, white handkerchief in her
fingers and for a minute it seemed to be like a tiny boat waiting to take her off
on a care-free trip around the lace-like coast of her island. The freckles, on
the back of her hands, became rosary beads. She opened her mouth to say,
for the first time, something other than what she had been used to say all
these years. “May the hour and the moment of their coming burn in hell”. She
stopped. Her daughter ran quickly out into the courtyard, as if she had had an
ominous premonition. She touched the old lady’s shoulder, and her jaw,
dropping in amazement, managed to say. “Who, mother? Who did you say
brought them?”
Her mother shrugged her off, and a different expression crossed her face,
which, however, still appeared calm. But her daughter stood there next to her,
waiting for a reply. Not that the daughter didn’t know what the reply would be,
but she needed to persist for some kind of correction.
“The hour and the moment brought them”, said the old lady, but then, almost
immediately, she realised that this was an impossibility. The hour and the
time could never have such power, so she added, “Blessed be His name
and His Grace”.

Buy Diazepam Legally Uk Hearing her own words the old lady leaned sideways in the chair and her
eyes closed.
The daughter cried out, clasped her head in her hands, sweat ran down her
face. She felt guilty had her insistence on the truth perhaps killed her
mother, her insistence on her mother showing disrespect towards the Divine.
She wiped away tears and sweat, shouted for help, but then stopped. She
suddenly started to gabble. There wasn’t even a bird in the courtyard to hear
her gabbling, interweaving with her own words, those things her mother had
no time to say; as if she begged to be able to die too, while she cursed.
Her voice was carried down as far as the harbour, where the ships were
loading cigarettes for Lebanon.
“May the hour and the moment of their coming burn in hell, may they be
burned from the root upward. May they never see a fair day. Make it happen,
my God!”
She seized her dead mother’s hand to kiss it, and saw again the rosary beads
of the freckles on the back of it. She heard the voice of legacy coming from
an ancient psaltery, strengthening the unalterably great-hearted Cypriot race,
and she had no desire to be any different to others of her blood.
While she sobbed, she carried on the tradition of euphemism.
“Pity them, and give them a heart, my God”.

http://blog.leedsforlearning.co.uk/primary/year-of-reading by Erma Vassiliou
frοm her book “The key of Arsinoe”
(Το κλειδί της Αρσινόης),
of September (1996),
and from the particular part of the book
titled “Cypriot scenes”.

One thought on “Euphemisms of an old lady”